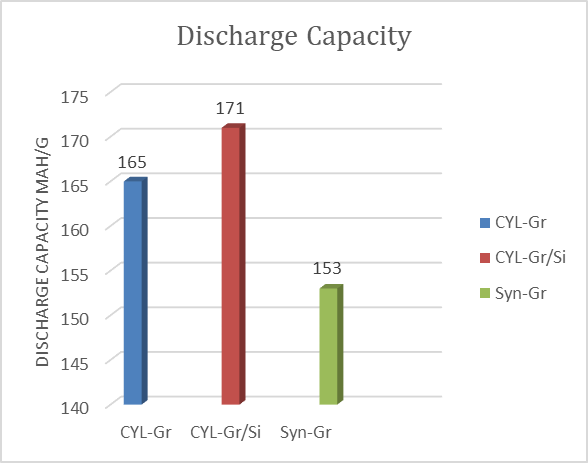 “We had very good results from our initial half-cell silicon enhanced battery tests, but this exceeded my expectations for full cell silicon enhanced batteries,” stated Ceylon CEO Don Baxter. “These results are a highly significant development for Ceylon. The unique characteristics of our Sri Lankan vein graphite combined with our proprietary processing technologies produces a Li-ion battery with significantly higher power and energy as evaluated by UCL. Based on the results, Ceylon’s graphite will set a new industry standard.”

Further, Ceylon’s industry leading performance is combined with outstanding ESG achievements given the energy consumption of the end-to-end process of producing battery grade anode material from vein graphite is the lowest, relative to synthetic and flake graphite,” added Baxter. It is a fact that vein graphite from Sri Lanka does not require primary processing, due to the high in situ grade above 90%Cg, giving us a huge environmental advantage over competitors.”

Donald K. D. Baxter, P.Eng., CEO of Ceylon Graphite Corp., is a Qualified Person as defined by National Instrument 43-101 (“N.I. 43-101”) guidelines, and has reviewed and approved the content of this news release.

Ceylon Graphite is a public company listed on the TSX Venture Exchange, that is in the business of mining for graphite and developing and commercializing innovative graphene and graphite applications and products. Graphite mined in Sri Lanka is known to be some of the highest grade in the world and has been confirmed to be suitable to be easily upgradable for a range of applications including the high-growth electric vehicle and battery storage markets as well as construction, healthcare and paints and coatings sectors. The Government of Sri Lanka has granted the Company’s wholly owned subsidiary Sarcon Development (Pvt) Ltd. an IML Category A license for its K1 mine and exploration rights in a land package of over 120km². These exploration grids (each one square kilometer in area) cover areas of historic graphite production from the early twentieth century and represent a majority of the known graphite occurrences in Sri Lanka.

Further information regarding the Company is available at
www.ceylongraphite.com

This news release contains forward-looking information as such term is defined in applicable securities laws, which relate to future events or future performance and reflect management’s current expectations and assumptions. The forward-looking information includes statements about Ceylon Graphite’s grids, Ceylon Graphite’s plans to undertake additional drilling and to develop a mine plan, and to commence establishing mining operations. Such forward-looking statements reflect management’s current beliefs and are based on assumptions made by and information currently available to Ceylon Graphite, including the assumption that, there will be no material adverse change in metal prices, all necessary consents, licenses, permits and approvals will be obtained, including various Local Government Licenses and the market. Investors are cautioned that these forward-looking statements are neither promises nor guarantees and are subject to risks and uncertainties that may cause future results to differ materially from those expected. Risk factors that could cause actual results to differ materially from the results expressed or implied by the forward-looking information include, among other things, an inability to reach a final acquisition agreement, inaccurate results from the drilling exercises, a failure to obtain or delays in obtaining the required regulatory licenses, permits, approvals and consents, an inability to access financing as needed, a general economic downturn, a volatile stock price, labour strikes, political unrest, changes in the mining regulatory regime governing Ceylon Graphite, a failure to comply with environmental regulations and a weakening of market and industry reliance on high quality graphite. Ceylon Graphite cautions the reader that the above list of risk factors is not exhaustive.

In order to view or create your watchlist, you must Login or Register


Latest Videos
Show More
Back to top button
Close
We use cookies on our website to give you the most relevant experience by remembering your preferences and repeat visits. By clicking “Accept”, you consent to the use of ALL the cookies.
Do not sell my personal information.
Cookie SettingsAccept
Manage consent